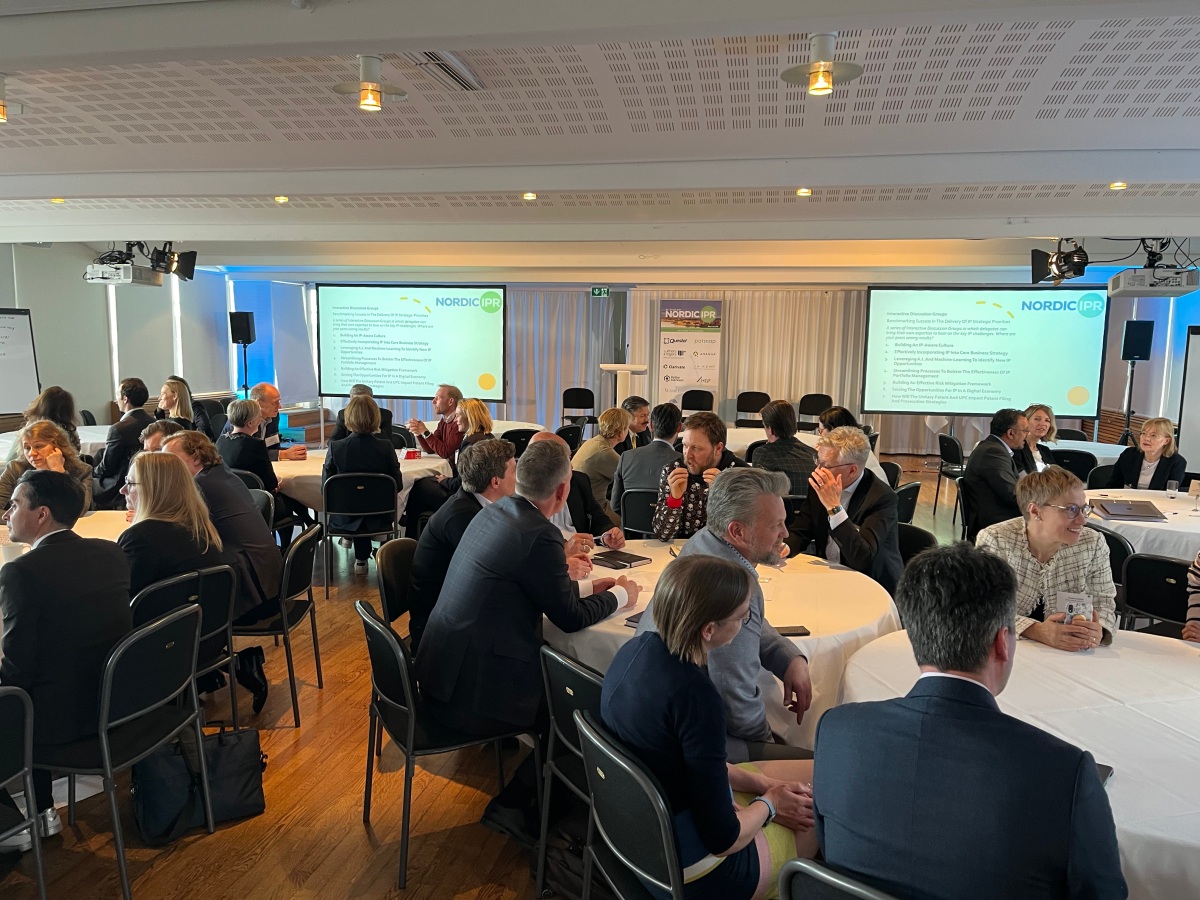 As the need and acceptance back to 2019 levels, to meet and discuss things in person, grows with every company , we visit the latest IQPC Conference on IP Management; and as the delegates told me – it’s been a while.

The view from the 7th floor of the Brewery Conference Centre, as it looks out past Sodermalarstrand, to the famous City Hall and its Blue Room – is one of the best in Stockholm.

True, local cognoscenti, or “new money” – would probably prefer something more sedate and subtle, in Stureplan, politely rubbing shoulders with chi chi shops or private client offices around Biblioteksgatan. But if you are going to invite 140 of Europe’s top experts in Intellectual Property, to congregate face to face, and give their views – then you need to show that their views matter. Nowhere does it better than a standout view of the home Nobel Prize arena.

And matter, they do. With a tag lines and discussion sessions focussing on statements such as “Bringing the IP Portfolio to Life”. And the even more direct “Creating an IP Culture which pursues, protects and leverages IP as a Core Element of Business Strategy” – these are marketing driven perspectives that despite the legal nature of the subject matter – are already embedded in the commercial future of each company.

It is a message that, if you had arrived late on the opening day, even by just a few minutes, you could have missed. Maria Mellgren, IP Director at the Essity company – stood up at around 10.00am and delivered one of probably the top three reach – out discussions of our two days together, and what she said was two fold – that companies do not recognise the importance of brand protection as part of the IP function, that if you are acquisitional, there can be a struggle of management to see where each new brand can play its part.

Or. More important, which, of your portfolio of patents – will play their part. Sure, they are all good eggs – but which are the ones that will fly?
These are commercial discussions. Ingrid Vitanen, VP of Legals at Nokia, talked about “brand enforcement” – that this was a “work in progress”.
This was a Conference where even by lunchtime on the first day, it was clear that each delegate, each protagonist, wanted to play their part. There were no shortage of provocative views, despite the friendly ambience of the occasion . And whilst, for the first few minutes of Day One – there was a clear recognition that if you are going to focus on IP – then Sweden and Stockholm is the place to do it, and the relief of being able to get back together after all these months and years – people were here not to reminisce, but to say “ok – where is this all taking us”?

For the moment, as we moved into an after-lunch discussion – the Conference moved subtly away from Commercials and into the area of Risk. Several Patent Attorneys talked to us in the earlier break, about “financing risk management”. Heidi Adler, Director International Property Rights, at Orion Corporation, spoke for several minutes about “Risk Mitigation”. We are in the Nordics after all. We don’t immediately reach for our Lawyer.

And then there was the more philosophical question – “well, why do we have IP issues at all”? Are they not suffice gently regulated?

As the day progressed into Day Two, slowly this became a discussion about risk, and reward. And is the move towards open standards, ie, where everything fits and we can each benefit from the others developments or intellectual property – the term was FRAND was mentioned several times – and the notion that, as far as legal protection was concerned – there is no simple answer. We just have to pick our battles.

It took way into the Conference before Felora Mofidi, Global Head of Intellectual at DSX, voiced something that many of us had been thinking, but few had mentioned sufficiently – that, – if we believe in the value proposition commercially of our IP, then this demands a change of culture. Only 30% of delegates seemed to “get” this point, but it remained one of the standout moments, subtly thrown in to the mix of argument, but it represented the journey of IP from the purely legal patent management, to the realisation that corporate value depends on everyone getting on the same train, so to say.

It was a key moment, and fitted the direction of the Conference as a whole. As Day Two talked about “Capitalising on Future IP Opportunities “ – I quietly slipped away.. I had an evening meeting further north.

Managing Editor at ProfoMedia, and Senior Partner at The CRT Partnership, a a leading specialist in brokering international alliances and partnerships; a published author in own right - as well as accredited media for major trade associations, including HIMSS, Vitalis, and others. View all posts by umnitso

This site uses Akismet to reduce spam. Learn how your comment data is processed.

At ProfoMedia, we aim to bring you Insight - not just Information, in a way that gives you Opinion that you can digest straightaway. Be one of our regular visitors.

NOW YOU CAN GET MORE OUT OF YOUR PROFOMEDIA. Go visit https://ko-fi.com/profomedia. Choose your level of monthly contribution, and build your relationship with us.