We review the revival of the Puccini opera “La Boheme”, at ENO in London just a few days ago,  and ask – is this a simple story, a view from a distance so to say, where you and I are looking on almost against our will, through some window  – or a classic love story, that has stood the test of time?

Perhaps it is both.

I never thought during this performance, that I was in the grip of a serious romantic affair, as say I have been in Madame Butterfly, or Carmen. But I did feel that I was a voyeur, and unable to change any of the outcome.  I knew Mimi would die. And the facts are these:

If you are looking for an Opera that mirrors life in all its seediness and lack of hope – then the Puccini classic, “la Boheme” would not be a bad choice. Created just a few years after the Emile Zola equally classic novel “L’Assommoir” (the boozer…), if you want to get down and dirty amongst the very poor, well Paris in the late 19th century, is where it’s at.

The story is simple enough. Art for art’s sake does not pay the bills. Mimi, who by that time, is already freezing to death, finds love with Rodolfo – who then gets jealous, – and it doesn’t end happily ever after. It’s an opera, after all.

For once, the tension that we normally expect and associate with ENO production, did not readily surface until Act 3-  and yet all the classic ENO properties were there; very tight production, wonderful orchestra; great melodic delivery. For me, it took the arrival of Louise Alder, as Musetta, before things started to happen; her approach is almost Mozartian, very staccato and pin-point, it cuts through perhaps the saccharine lines of her colleagues.

And that’s unfair, because this production has stood the test of time. My graphic above shows the programme of La Boheme in 2010, and nothing has changed.

This is an Opera and performance where you can take anybody who does not know about opera, but wants a classic music evening. Obviously, there is a new class of performers, if you like,  a new generation.  Ben Glassberg  excelled in the power of conducting the ENO orchestra. And there was great interplay, particularly Act1. If I was feeling distant in watching the story unfold, then it was also nice to be entertained, as opposed to be educated.

The thing  is – the story, and its delivery, just works almost on autopilot. You sit back and let ENO deliver. And if there are questions, such as; “are Mimi and Rodolfo actually in love?” – well, could be….  And “why does Mimi have to die”? – well, that’s what happens, it’s the wrong part of  Paris at the end of the 19th century. It’s a story, and these are the facts. 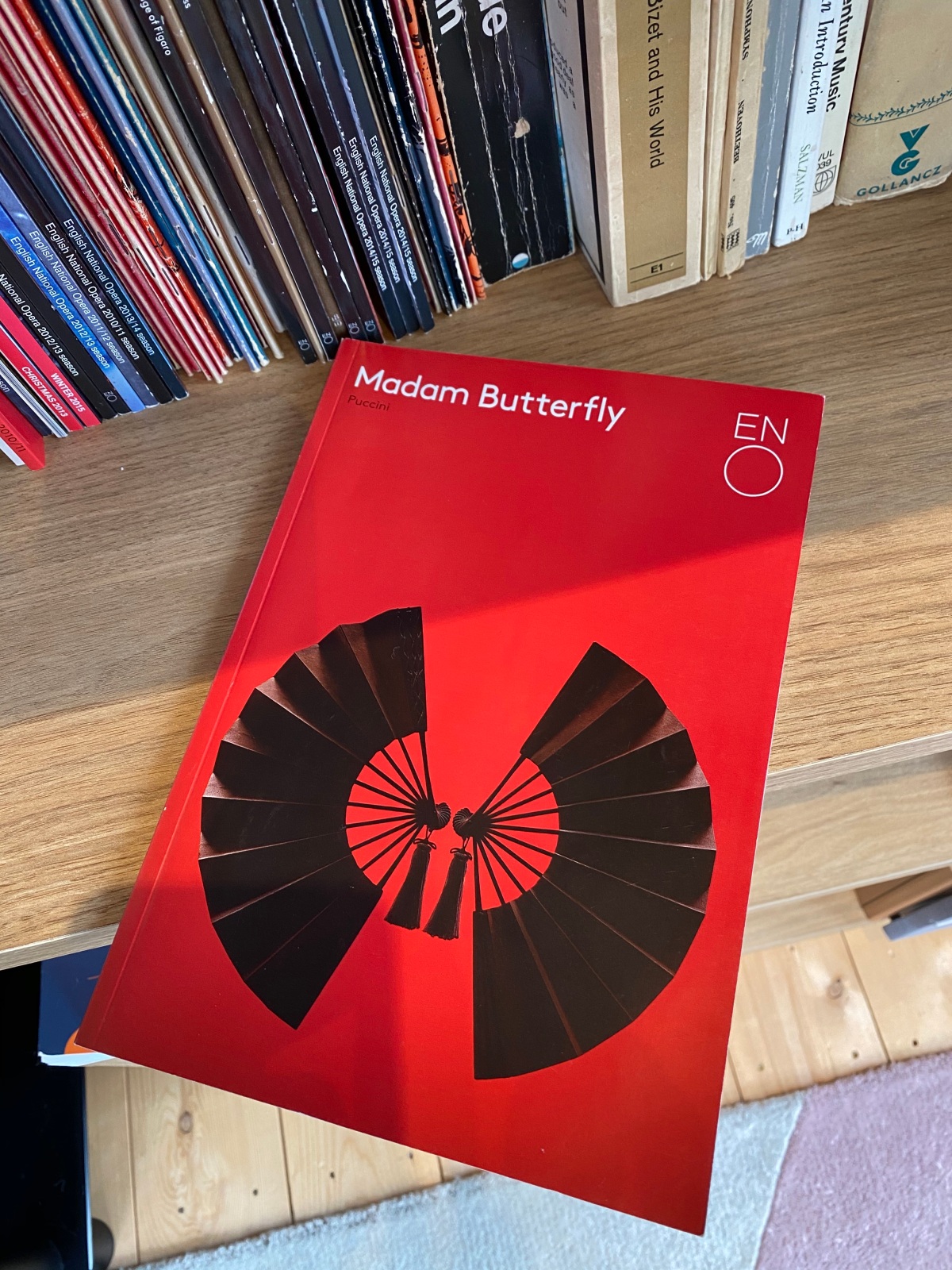 We look at the latest interpretation of  this everlasting story of unrequited love at ENO London.

The performance is barely eighteen minutes in, before there is the soupçon of tears in my eyes. The mesmeric Natalya Romaniw as Cio Cio San, has hardly set foot on stage.

The irony is that as the opera unfolds, Natalya is well able to hold the stage , on her own, her note perfect and pure singing just reaches out to you and I in the audience, the look of innocence, of trust – she does not need her co-conspirators, uncles, families,

Even before her entrance, we already know from Dimitri Pittas as the totally convincing Pinkerton, his throwaway remarks about marriage – that this story line has ended before it has begun.

And yet there is hope. After the deep red of the Japanese graphic, following the earlier production back in 2015 and in my photo above from the cover of a programme of that time – and with the lone silent dancer drifting up and onto the enormous stage, with nobody in any doubt that this is a story based on Japanese custom and not western mores – suddenly , we are off.

The orchestra hits the ground running. We are moving at a fast pace. It reminds me of North by North West. I’m expecting the clipped tones of Cary Grant. But Pinkerton sounds nothing like Roger Thornhill.

The direction and clever use of panels to metamorphose from one scene and mood to another, is as fluid as I remember, the sudden orchestra crescendos to remind you that fate is playing us here, and the classic volume of sound that is such a hallmark of every ENO production.

Yes, there are the groups of supporting cast, with Stephanie Windsor Lewis excelling as the constant Suzuki. But “Madame Butterfly” is essentially about two people. It lives or dies on the chemistry of Cio Cio San and Pinkerton. Everyone knows the story line. The question is not how will this romantic moment end, but will it convince us that we are there too.

It does not disappoint. The closing first act is as good as any I have seen, very tender, – and you wonder if just maybe, Pinkerton will have a change of heart.

I look around me in the audience. There is the mum with her younger daughter, both eager to be part of this witnessing from a distance. Just alongside are an older couple, they lean forward and talk to their friends in the row adjacent. A lady stands up during the interval to take a photograph of the rows and tiers of this magnificent theatre.

The secret sauce of this Madame Butterfly and its longevity, is the delivery by the performers of a convincing whole, that ENO has long since known how to convey. But it is also the understanding by all of us on both sides of the stage, that Madame Butterfly is a musical story and a lesson of morality. It reaches out to all of us. Despite its tragedy, we want to be part of it. If ever there was a story made for opera, this is it.

At ProfoMedia, we aim to bring you Insight - not just Information, in a way that gives you Opinion that you can digest straightaway. Be one of our regular visitors.

NOW YOU CAN GET MORE OUT OF YOUR PROFOMEDIA. Go visit https://ko-fi.com/profomedia. Choose your level of monthly contribution, and build your relationship with us.